It turns out that that the ancient Indian practice of yoga can help fight a 21st century health issue: computer vision syndrome. Yoga is an ancient Indian science which includes the practice of specific postures, cleansing practices, regulated breathing and meditation. Readers of this blog know that dry eyes are one of the symptoms of computer vision syndrome and arise, in part, because we blink less when using the computer. Other symptoms include eyestrain, irritation, tired eyes, a burning sensation, redness, blurred vision, headaches, neck pain and double vision

Common ways to fight computer vision syndrome include the use of specially prescribed and designed computer eye wear that reduces eye strain and also keeps the eyes hydrated by increasing the humidity between your eyes and the lens of the eye wear. 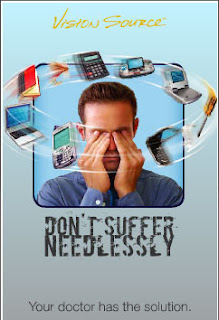 In addition to computer eye wear, a study published in the journal Head and Face that examined visual discomfort in professional computer users in Bangalore shows that a combination of yoga practices  may help alleviate the symptoms of computer vision syndrome.

The study researchers, some of whom are affiliated with the Swami Vivekananda Yoga Research Foundation in Bangalore, India, took two hundred and ninety one professional computer users and divided them into two groups.  One group practiced yoga for one hour a day, five days a week for sixty days while the other group did no yoga but did their regular recreational activities for the hour.  Both groups were assessed at baseline and after sixty days for self-rated visual discomfort using a standard questionnaire.

The researchers employed general whole body yoga postures as well as a subset eye-specific yoga movements, called Trataka.  Interestingly, trataka resembles some exercises employed during optometric vision therapy to treat eye movement disorders.  Here is how the authors of the study described the yoga that they prescribed:


The practice of trataka involves two sets of eye exercises. (i) Shifting the gaze (by moving the eyes alone) in eight directions. During this exercise, practitioners are asked to use their right thumb (and when gazing to the left, their left thumb) as a cue to direct their gaze. The directions are up, down, up to the left, down to the left, up to the right, down to the right and rotation of the eyes clock-wise and anti clock-wise. (ii) During the second exercise, practitioners gaze at a flame placed at eye level without blinking. While gazing at the flame, practitioners are instructed to focus their gaze on the flame and subsequently defocus while keeping their gaze on the flame.


Throughout the practice practitioners should sit upright and should avoid moving their head to shift their gaze.