Dr. Susan Barry writes the blog "Eyes on the Brain" at psychologytoday.com about the eye-brain connection.  She is the author of the popular book Fixing My Gaze about how optometric vision therapy cured her stereo-blindness allowing her to see in three dimensions for the first time in her life.

One of her recent blog posts deals with the issue of seniors with eye movement disorders.  The post is compelling because such disorders are usually diagnosed and treated in children - at least we hope that they are (because if allowed to persist into adulthood they are associated with lots of undesirable social problems like unemployment and behavioral problems.)

She wrote about her father who decided to quit driving in his early eighties. Dr. Barry noticed that over the next couple of years her father's life dramatically changed by contracting to the point where her father barely left the house. He was also becoming withdrawn and upset. Dr. Barry noticed that her father kept squinting his left eye shut. She wondered, "Could my father be squinting his left eye because it was turning in? If so, the left eye would be aimed at a different place in space than his right, providing his brain with confusing and conflicting visual input."

Dr. Barry knew to ask that question because she suffered from strabismus (crossed eyes) as a child and was successfully treated by an optometrist with with vision therapy.  She then did enough investigating that she realized that she should take her father to the optometrist:

I thought back to a story my father had told me about his days in the Air Force during World War II. Since he was an artist, he had been assigned to interpret aerial photographs. Sometimes, he’d be given stereo pairs of photographs which he viewed through a stereoscope. While he could see the 3D in the images, he told me that his sense of the 3D was not as good as others. Perhaps, he had always had subnormal binocular vision. When he stopped driving, he no longer needed to look in the distance. Indeed, he rarely looked further than the walls of his tiny house. Without driving, he had lost the ability to keep his eyes aligned, especially for distance viewing. Eye alignment, I concluded, was not a strong suit in our family.

So, one afternoon, during a typical visit, I sat about five feet from my dad and asked him, quite casually, how many heads did I appear to have. My father studied me for a while and then responded with great surprise: “You have two!” He could still read without the letters doubling, but when we gazed out the window, all the objects outside appeared double. He hadn’t noticed this previously, but, then again, he had avoided looking out. No wonder, my father was reluctant to take a walk with me. His perceptual world was thrown into confusion.

Dr. Barry then took her father to a developmental optometrist who diagnosed him with esotropia - a condition in which one eye turns in toward the nose.  Since her father's two eyes were not pointing at the same object, double vision and poor depth perception resulted.  The optometrist fit Dr. Barry's father with specially designed prism glasses that bent light in a way that compensated for her father's turned eye.

As Dr. Barry  notes in her post, falls are a leading cause of serious injury in seniors and people with poor depth perception are much more prone to falls than the general population.  When you combine old age and poor depth perception, you may have a recipe for disaster.  It's a good idea for seniors to get comprehensive binocular vision eye exams.  Not all optometrists test binocular vision and patients and their care-givers need to ask the right questions of their doctors to ensure that the right tests are being done.  To find a developmental optometrist visit the website of the College of Optometrists in Vision Development.

Orthokeratology is shown to be effective in correcting astigmatism. Patients with astigmatism now have an alternative to glasses, contact lenses and laser surgery 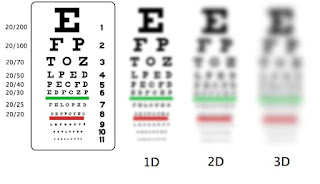 A new study published in the June 2012 issue of Optometry & Vision Science proves that orthokeratology is a safe and effective treatment for people with astigmatism.  Orthokeratology (sometimes called orthok or corneal reshaping) is a treatment where the patient wears a custom designed eye retainer at night and has perfect vision during the day.  No surgery, no glasses and no contact lenses are required apart form the overnight lens retainer that reshapes the cornea of the eye while the patient sleeps.

Orthokeratology has also been shown to slow the progression of myopia, which is what makes it so attractive for young people who experience a worsening spectacles prescription every time they go to the eye doctor.  Read our past post on the latest research that confirms that orthok is effective for stopping myopia progression.  Myopia progression is dangerous phenomenon because it increases a person's risk of blindness from retinal detachment or glaucoma.

The new study published in the journal Optometry & Vision Science set out to determine the efficacy of toric orthokeratology (a new type of orthok retainer lens which until now was thought to be experimental) in correcting myopia and astigmatism in myopic children with moderate to high astigmatism.

The subjects of the study were children 6 to 12 years old with moderate to high astigmatism who were fitted with a European-made toric orthok retainer lens.  The researchers then measured the subjects' vision at baseline, after one night, after one week, and and after one month of wearing the overnight lens retainer.

The results were that the orthok lens retainer significantly reduced manifest myopia and astigmatism  after 1 month of overnight lens retainer wear.  Reassuringly, no significant adverse events were reported at the one- month mark.

The authors concluded that the new type of orthok retainer lens design was effective in correcting  myopic children who had moderate-high astigmatism.
Posted by Vision Source Vancouver Optometrists at 6:59 PM

At study published in the Journal of Behavioral Optometry surveyed 150 teachers in Michigan through an online survey.  The purpose was to examine the perceptions of teachers concerning the connection between vision problem detection, academic achievement and vision therapy intervention.

The survey found that 86% of teachers had recommended at least one child for a comprehensive vision examination. Squinting was the most common reason for the recommendation.

81.9% of teachers reported witnessing improvement in students who had undergone vision therapy and  most participants (86%) believed that the state or federal government should enact a mandatory comprehensive eye examination program.

The result is not surprising because it is consistent with what we hear form parents and teachers of vision therapy patients we have had in our clinic  Many of them tell us that vision therapy has changed the child's life!  The result is also expected from all the studies that have been done on vision therapy and its impact on academic performance.

Is your child smart in everything but school? The ultimate convergence insufficiency info-graphic.

Here is a great info-graphic on convergence insufficiency.  It comes from the Vision Help blog, which is one of the world's best sources for information on vision development, developmental optometry, vision therapy and eye movement disorders.

Posted by Vision Source Vancouver Optometrists at 8:43 AM

Accommodative insufficiency is one of the most common eye muscle disorders diagnosed by pediatric optometrists.  Accommodative insufficiency makes a child function like a middle age person who needs reading glasses.  It means that their eye muscles do not constrict enough for them to focus up close.  The condition can be treated in children but the only answer for adults is to wear reading glasses.

Accommodative insufficiency usually causes problems related to reading and other close work
activities.  Symptoms include blurred vision at near, intermittent blurred vision when looking up from near work, headaches,watering or burning of the eyes, tired eyes, loss of concentration, and avoidance of near activities.

Research has shown that Vision Therapy is an effective treatment for accommodative insufficiency. After vision therapy, the difference in a child's life can be dramatic when school activities that were once difficult, anxiety provoking and self-esteem destroying suddenly become easy, a source of confidence and an affirmation of the child's ability.  It is an inspiration for our doctors and vision therapists to see these results in our patients and its what makes paediatric optometry such a rewarding profession.

Posted by Vision Source Vancouver Optometrists at 8:41 AM 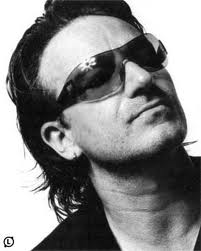 We know that sunglasses protect the eyes from harmful UV radiation that can lead to diseases like cataracts, macular degeneration (which is a leading cause of blindness in North America) and eye cancer.

But a recent survey by the Vision Council found that only 1 in 6 adults said eye health was the reason for wearing sunglasses (in fact health is the major reason to wear sunglasses). Two-thirds of respondents said that the purpose was to prevent glare.

So why do people not wear sunglasses? Here are some reasons found by the survey:

• About 14% lose or break sunglasses often.

• About 20% don't believe their eyes are at risk from sun exposure.


That brings us to the See for Life Sunglasses buying tips.  These tips will help ensure that you wear your sunglasses often, that you don't loose them and that, as a result, your eyes remain healthy for life.

What is the best sunglasses lens in the world?  Find out by asking about the ESPF rating.
April 28, 2013

Why do parents take better care of their own eyes than those of their children?
Sep 26, 2012

Posted by Vision Source Vancouver Optometrists at 7:06 AM