An interesting study was published in the October 2013 issue of Optometry & Vision Science.  It addresses a situation well known to many contact lens-wearers. Over the course of a day of contact lens wear, discomfort increases for some people.  And for some of these people, changing or replacing the lens to a fresh lens part way through the day does not help. Why is that?  This study may have an answer and suggests that it is not the lens, it's physical changes happening on the surface of your eyes.


The study examined the comfort reported by patients throughout and at the end of a 10-hour day of wear. Subjects were surveyed on a 0–100 scale for comfort on two separate days.

On the first day, nothing was done to the lenses they wore throughout the day, and study participants reported decreasing comfort during the day. This result was expected, as many optometrists observe this in the clinic. Doctors have long argued about the cause of this discomfort. Was it due to ill-fitting lenses?  Or was it due to changes in the surface of the eye caused by contact lens wear?

To answer that question, on the second day the lenses were removed after 5 hours of wear. After removal, either the same lens was reinserted, or it was replaced and a new lens. The assumption was that if lens comfort improved by removing and replacing the same lens, then the surface of the eye was to blame.  On the other hand, if comfort improved after switching to a new lens, then the fit of the lens may be at fault.  The control group wore lenses continuously for 10 ours with no reinsertion or switching to a new lens.

The results showed that there was no difference between the control group (that wore the lenses continuously for 10 hours) and either the group that removed and reinserted the same lens or the group that switched to a new lens.  This lead the researchers to conclude that the increasing discomfort throughout the day was not related to the lenss. They suggested that the likely cause of increasing discomfort was a "fatigue-like response in one or more ocular tissues or stimulation of ocular surface nociceptors induced by the presence of the contact lens."

Posted by Vision Source Vancouver Optometrists at 3:30 AM

Yet another study supporting the use of orthokeratology (also known as corneal reshaping) appeared in the November 2013 issue of the scientific journal Contact Lens.  The new study found that long-term satisfaction rates with orthokeratology treatment were high.  We have provided orthokeratology at our Vancouver eye clinic since we opened.

The researchers who conducted the new study used a questionnaire where patients rated their visual experience and satisfaction levels with orthokeratology on a scale of 0-10.

The results of the study showed that light distortion in low light conditions decreases over time and decreases more quickly in younger patients and in patients with lower amounts of myopia. Predictably, visual performance declined after a patient skipped a night of lens retainer wear but this was usually tolerated.  In addition, the majority of patients report that they skipped overnight wear at least 1 night per week, but tolerate the resulting transient decrease in vision. Overall satisfaction was high, even after skipping a night of lens wear.

Here are the results in the study's own words:

Who benefits the most from the orthokeratology treatment for myopia progression? New study has the answers.
September 28, 2013

Orthokeratology slows or stops the progression of myopia in children
July 6, 2013

Study suggests that young children may benefit from orthokeratology
February 14, 2013

Orthokeratology is shown to be safe for correcting myopia in chidlren
Aug 11, 2012

Orthokeratology is shown to be effective in correcting astigmatism and myopia
Jun 18, 2012

Laser eye sugery makes you queasy? Orthokeratology is a safe and effective alternative
Jun 09, 2011
Posted by Vision Source Vancouver Optometrists at 7:33 AM

Oral contraceptives double the risk of glaucoma, a leading cause of blindess

Research presented recently at the 2013 Meeting of the American Academy of Ophthalmology in New Orleans, shows that women who have taken oral contraceptives for three or more years are twice as likely to suffer from glaucoma.  Glaucoma is one of the leading causes of blindness and vision lost to glaucoma is lost permanently. Glaucoma slowly takes your vision, starting at the periphery and working its way to the center.  Many people with glaucoma don't know that they have it until it is too late. The only way to detect glaucoma early enough for effective treatment is through a regular eye exam.

This is normal vision: 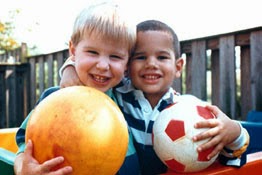 This is vision with glaucoma in its advanced stages: 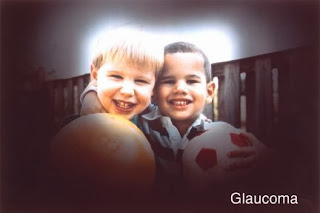 The study looked at 3,406 American women aged 40 years or older who completed a vision and reproductive health questionnaire and underwent eye exams. The researchers found that females who had used oral contraceptives, no matter which kind, for more then three years were 2.05 times more likely to also report that they had also been diagnosed with glaucoma.

The study means that women who have taken oral contraceptives for more than three years should have a regular eye exam to screen for the early onset of glaucoma.  Other risk factors for glaucoma include elevated pressure inside the eye, visual field deficits, family history, South Asian or African ancestry, a history of myopia and other risk factors.  See your eye doctor if you are concerned. 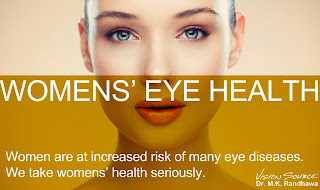 The study rings another note of caution for women when it comes to eye health. Women are at significantly higher risk than men for many eye diseases and must therefore ensure that they are vigilant about their eye health.  Read about women's eye health at the link below:

Posted by Vision Source Vancouver Optometrists at 6:04 AM

AMD (age-related macular degeneration) is the leading cause of blindness in those over 50.  AMD breaks down cells in the layer of tissue called the retina in the back of the eye that provide
sharp central vision.  This is the type of vision that is necessary for tasks such as reading, driving, and recognizing faces.  Advanced AMD can lead to significant vision loss and is the leading cause of blindness in North America.

The purpose of the AREDS2 study was to evaluate the efficacy and safety of particular nutrient supplementation: lutein plus zeaxanthin and/or omega-3 long-chain polyunsaturated fatty acid supplements in reducing the risk of developing AMD. The study also assessed the effect of reducing the amount of zinc and of omitting beta carotene from the original AREDS formula.


This was the original AREDS formulation:


These were the modifications that were tested in AREDS2?

The results of AREDS2 were summarized by Stuart P Richer OD, PhD as follows:

The AREDS2 results for the average American with a suboptimal daily intake of lutein/zeaxanthin showed a statistically significant prevention of catastrophic vision loss, primarily neovascularization. That was an incredible result, favoring a new AREDS2 formulation minus beta carotene but with lutein plus zeaxanthin.


AREDS2 showed that there was an approximate 34% reduction overall in the risk of premanent vision loss. This means that with optimal nutrition many hundreds of thousands of people could have avoided vision disability that has made them illegal to drive and that requires them to take injections that costs hundreds of dollars each time.

In the first AREDS trial, participants with AMD who took the AREDS formulation were 25 percent less likely to progress to advanced AMD over the five-year study period, compared with participants who took a placebo. In AREDS2, there was no overall additional benefit from adding omega-3 fatty acids or a 5-to-1 mixture of lutein and zeaxanthin to the formulation. However, the investigators did find some benefits when they analyzed two subgroups of participants: those not given beta-carotene, and those who had very little lutein and zeaxanthin in their diets.

More than 4,000 people, ages 50 to 85 years, who were at risk for advanced AMD participated in AREDS2 at 82 clinical sites across the country. Eye care professionals assess risk of developing advanced AMD in part by looking for yellow deposits called drusen in the retina. The appearance of small drusen is a normal part of aging, but the presence of larger drusen indicates AMD and a risk of associated vision loss. Over time, the retina begins to break down in areas where large drusen are present during a process called geographic atrophy. AMD can also spur the growth of new blood vessels beneath the retina, which can leak blood and fluid, resulting in sudden vision loss. These two forms of AMD are often referred to as dry AMD and wet AMD respectively.

Click here for the FAQ page on AREDS2 from the National Eye Institute.

Here are two questions that we frequently get asked at our Vancouver eye clinic:

Can a daily multivitamin alone provide the same vision benefits as an AREDS formulation?

No. The vitamins and minerals tested in the AREDS and AREDS2 trials were provided in much higher doses than what is found in multivitamins. Also, it is important to remember that most of the trial participants took multivitamins. Taking an AREDS formulation clearly provided a benefit over and above multivitamins.

Can diet alone provide the same high levels of antioxidants and zinc as the AREDS formulations?

No. The high levels of vitamins and minerals are difficult to achieve from diet alone. However, previous studies have suggested that people who have diets rich in green, leafy vegetables—a good source of lutein/zeaxanthin—have a lower risk of developing AMD. In the AREDS2 trial, the people who seemed to benefit most from taking lutein/zeaxanthin were those who did not get much of these nutrients in their diet. Within this group, those who received lutein/zeaxanthin supplements had a 26 percent reduced risk of developing advanced AMD compared with those who did not receive the supplements.

Posted by Vision Source Vancouver Optometrists at 10:07 AM