The former First Lady of the United States on vision therapy

Lyndon B. Johnson was the 36th president of the United States and was married to First Lady, Lady Bird Johnson. Many of  Lady Bird's interviews are collected at the LBJ Presidential Library at the University of Texas.  In one interview she talks about her daughter's "eye problem" and how an optometrist who prescribed a program of eye exercises (vision therapy) cured her and allowed her to function to the limits of her intellectual abilities.

Here is an except of the interview (thanks to the Vision Help Blog for finding this gem) where "J:" stands for Lady Bird Johnson and "M" stands for the interviewer, Harry Middleton.  Janet Travail, who is mentioned a couple of times in the excerpt below, was the White House physician at the time.  Lady Bird begins this excerpt and we have reproduced it starting in mid-paragraph: 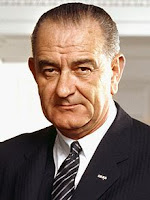 "It was a great thing that happened in her life.  She had long had an eye condition, now the well-known name for it is dyslexia.  But there are many, many forms of that, where what you see doesn't get translated to the brain in quite the way it should.  It used to be a puzzle to her teachers and to us, that this child that we thought was so bright would not make good grades.  And the teachers would talk to me about it and I would take her to the best eye doctors that I could, according to what my peers, the wives of other congressmen and senators, told me was the best eye doctor they'd found.  And they'd say, "Nothing the matter."  Finally--no, this was even after this time--she fell into the hands of the doctor who finally discovered her ailment, was maybe after Lyndon became vice president.  So it may have been still a year in the future.  But it's something that I want to tell a little bit about, because that lady doctor who took care of Kennedy--

M:   Travail.  Was it Janet Travail, or something like that.

J:   Janet Travail directed her, I think, as I recall, to a doctor, and his name I will too remember in a few minutes, because he has remained our lifelong friend.  [He] figured out what it was, gave her a series of eye exercises that changed her whole life and personality, because she became an achiever up to her mental capacity, her very remarkable mental capacity, whereas before, because of this eye problem, she had just kind of been stunted, and frustrated, and angry.  It changed her personality, her rate of performance; it was a wonderful blessing.

M:   Was it eye exercises only that changed it?

J:   Dr. [Robert] Kraskin.  I do not know what.  It was treatments; a large part of it were eye exercises, I think.  And whatever he did, it was a boon, principally to Luci, but just as much, almost, to her mother and the rest of the family.  And that is a digression.  But--

Here is a link to what seems to be a piece written by President Johnson's daughter, Luci, on her treatment by Dr. Kraskin and how it impacted her life: http://visiontherapyofvermont.com/2011/02/.

The interview above and Luci's comments at the previous link resonate with what so many patients with developmental vision problems and eye coordination problems (as well as their families) experience every day.  Vision therapy's positive impact on the patient also has not changed since Lady Bird's time.

The sad thing is that the run around that some patients receive before they find the right doctor and the right treatment is the same today as it was in the 1960's when Lady Bird and her daughter experienced the frustration of a treatable condition that the "best doctors" could not figure out.

The photographs in this post come from Wikipedia and are Lady Bird Johnson and President Lyndon B. Johnson.
Posted by Vision Source Vancouver Optometrists at 6:54 PM